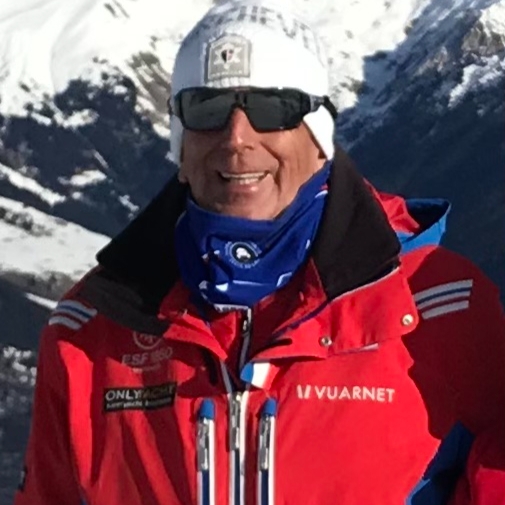 ‘Courchevel is the resort where the best possible conditions have been gathered!’

Alain Revol, who has been teaching alpine skiing within the ESF, comes from Savoie. He has been practicing snow sports since he is nine, the age at which he became ‘addicted’ to it. He then took part in school and club competitions and even won a few cups. Today, Alain speaks French and English and has been teaching since 1970. He now has 21 winter seasons to his credit and arrived in Courchevel thanks to acquaintances and after he taught in Mont-Dore. This last experience was beneficial for him, since he learnt how to adapt to any situation.

Bellecote and Les Jockeys are the slopes he particularly loves hurtling down, for he is surrounded by what he likes most in winter sports- snow and the mountains. For this instructor, the ski run in Les Trois Vallées remains the most beautiful in the world.

Initially motivated by his pleasure for snow sports he wanted to transmit, Alain is now driven by his pleasure to teach. Thank-you letters as well as gestures of acknowledgments he has received over years of experience are the greatest memories he keeps as a ski instructor, and always push him to go further in his teaching. According to him, ESF is synonymous with professionalism and trust, and it is always with great pleasure that he passes on his knowledge.

When not working as a ski instructor, Alain Revol works as a company director; for him, these two occupations seem more like leisure activities, both because of the responsibilities involved and of the sector. Concurrently, he likes practicing skiing in other countries as a tourist, and already did so in Switzerland, Italy and Austria. Apart from skiing, Alain has other hobbies, such as the mountains, tennis, cycling and golf.

When would you like to ski with me?
Information
Booking
Practical information
Resort mapMeeting point of the lessons Choose my skipassCheck our ratesChildren mealsChildren of the ValleyRegistration for Tests Flèche and Chamoisplan-station
Advice
Advice for the smooth running of your lessonMy levelFrench mountain tripA new way of organising your holidays to the French mountainsGet insured The Carré Neige insuranceFrequently asked questions
Offers
Children's offer 6 lessons = 7Trial offer AdultAquamotionResidents and seasonal workers offer
esf 1850
History Esf Courchevel 1850 spiritPartners and useful linksWe're hiring instructors