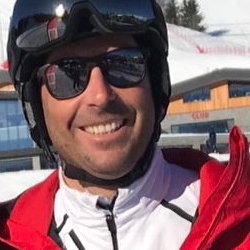 ‘My philosophy: improving while having fun’!

Sylvain has been skiing since the age of three. He immediately loved the adrenaline and the feeling of freedom conveyed by the alpine landscape.

After years of competition, Sylvain wanted to pass on his passion to the greatest number, in particular to young beginners. To him, the important thing is learning while having fun. Sylvain admires the ESF for its professionalism.

Even once the winter season is over, Sylvain does not leave his passion aside, since he is a salesman for Salomon skis. However, he also likes practicing other sports, such as tennis and golf. He also spends much time with his family, especially his children.

Great traveller, Sylvain has skied in several other European ski resorts. From these experiences abroad, he retains the good quality of service of these skiing resorts. By a matter of fact, the most beautiful ski run is for him kitzbuhel, Austria. However, he never had the opportunity to instruct in another resort.

When would you like to ski with me?
Information
Booking
Practical information
Resort mapMeeting point of the lessons Choose my skipassCheck our ratesChildren mealsChildren of the ValleyRegistration for Tests Flèche and Chamoisplan-station
Advice
Advice for the smooth running of your lessonMy levelFrench mountain tripA new way of organising your holidays to the French mountainsGet insured The Carré Neige insuranceFrequently asked questions
Offers
Children's offer 6 lessons = 7Trial offer AdultAquamotionResidents and seasonal workers offer
esf 1850
History Esf Courchevel 1850 spiritPartners and useful linksWe're hiring instructors